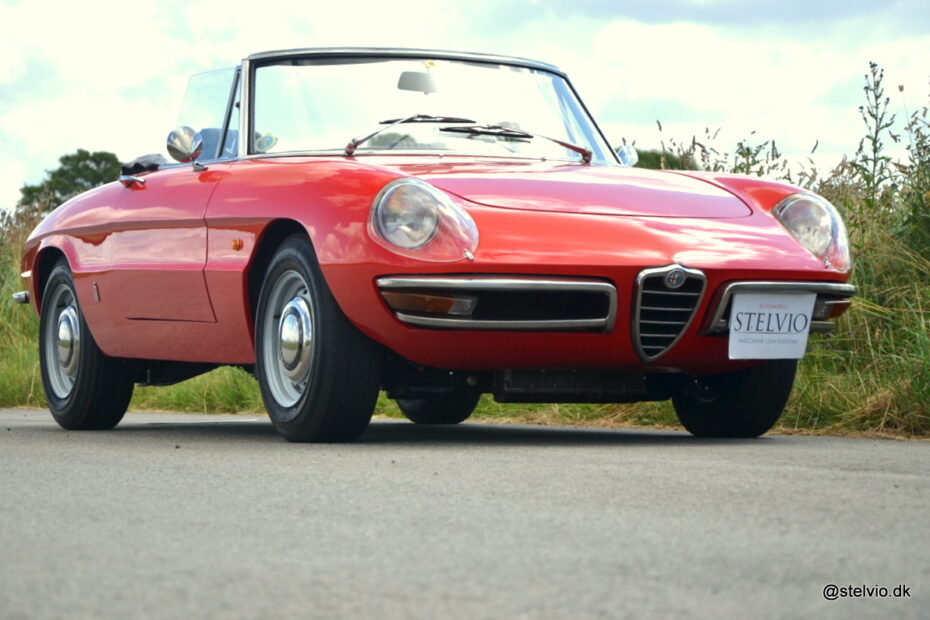 When the Duetto was introduced in 1966 it had a difficult task in replacing the little Giulietta/Gulia Spider, which the whole of Italy loved unconditionally. However, the design house Pininfarina managed to create one of the biggest sports car success ever with a design to live almost unchanged for the next 4 decades. Helping to establish the new 105 Series Spider as an evergreen among car lovers no doubt was the feature in the movie “The Graduate” of 1967 giving debut to Dustin Hoffman and Anne Bacroft as the gorgeous Mrs. Robinson.

The first Duetto from 1966 had a 1600 engine and this example produced a couple of years later as a 1750 Veloce still has the brilliant “Nord” aluminum engine with double overhead camshafts, 2 double carburattors, 122 hk and 5 speed gear box. The 1750 model furthermore received a higher gearing to better cope with the more powerful engine. Stopping power was ensured by disc brakes on al wheels. All in all mechanics, which were unrivaled by any of the competitors.

This example of the model is in a very fine condition. In December 1969 the car was exported to USA and came to Denmark in 2006. Here it received an almost total renovation of body, interior and mechanics including fitment of double Dellorto carburetors making the car drive and sound like a classic Alfa is supposed to. The engine work was performed by the best Danish name in classic Alfas. Also brakes, the complete undercarriage back axle etc were overhauled. All work is documented in a complete binder, which will follow the car. The color is classic Alfa Rosso Farina 514, which is the correct one for a Duetto.

Today the – rather rare – 1750 versions of the “Duetto” (it is actually only the 1600 versions which officially are named Duetto) are in high demand and prices are rising. Our example is a completely renovated and tested car, previously owned by an enthusiastic and knowledgeable Alfa person, which really shows.

There remains no further work to be carried out on this car – it is just a matter of getting behind the wheel and enjoy it!