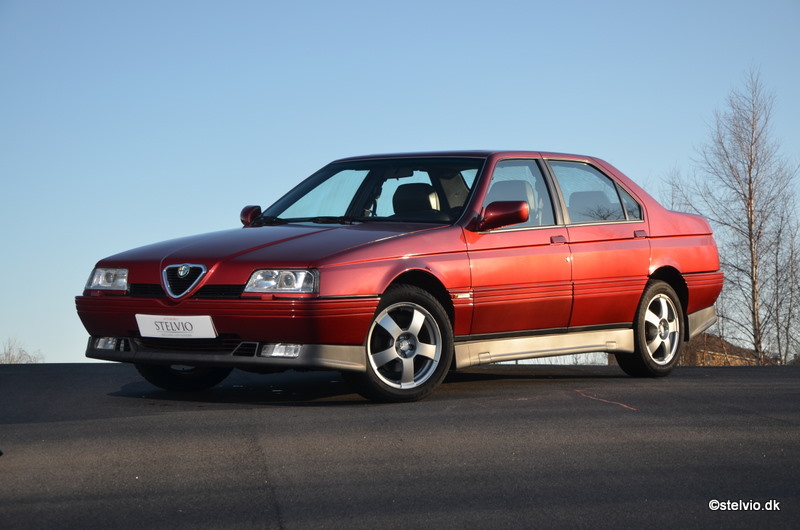 The 164 Q4 is definitely among, if not the biggest and most sophisticated pre-war sports sedan that Alfa Romeo ever produced. A huge collection of advanced technical solutions wrapped in the timeless lines of the Pininfarina styled bodywork. First of all the sonorous V6 engine with 24 valves delivering 231 BHP, making it the most powerful version of the Alfa V6, that in its days was appraised by many motor magazines and journalists as the world’s finest 6 cylinder engine.

In a collaboration with Austrian specialist Steyr-Puch the most sophisticated 4 wheel drive system ever seen in a passenger vehicle was developed – hence the name Q4. It consist of no less than 3 differentials capable of distributing power from 0% to 100% between the front and rear axle, to which ever has the best traction. It is connected to both the Motronic engine management system and the ABS brakes and also capable of distributing power between wheels on the same axle. Coupled to a bullet-proof 6-speed Getrag gearbox, the car has a drive line matched only by that of the exotic and prohibitively expensive Porsche 959.

In addition to its refined mechanics the 164 Q4 is fitted with almost every conceivable piece of luxury equipment. From the high quality Momo leather upholstery, the power adjustable and supportive Recaro seats with memory, electric sun roof, automatic A/C climate and much more, the 164 Q4 is indeed a rare bird from Alfa and one that when it comes to road holding, luxury and yes, – build quality, definitely is on par with its German rivals from BMW and Audi.

This 132.000 KM example is extremely well kept. It comes with full service and 2 sets of wheels. One set of new high performance summer tires on the original 3-piece Quadrofoglio Cromodoras and an extra set of winter tires on aftermarket alloys. Both can be seen on these pictures. Has Danish title and EU VAT is paid (not deductible). A pristine collectors item for the true Alfisti.