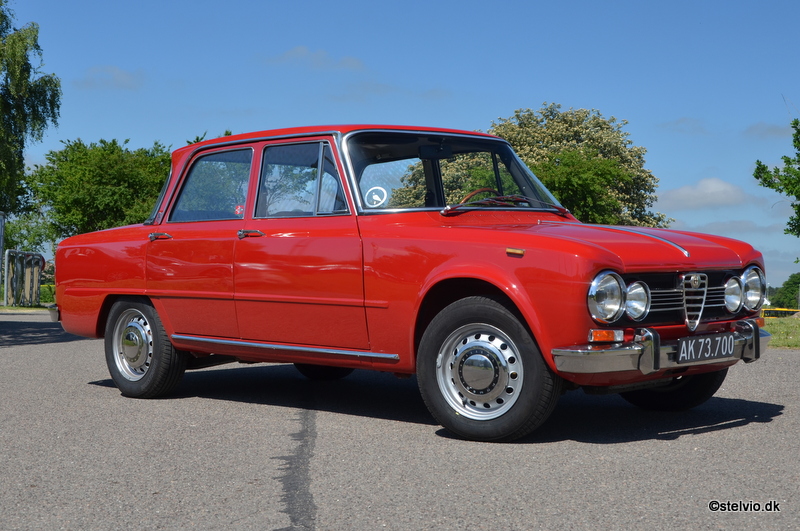 With the 1963 presentation of the Giulia, Alfa Romeo in fact invented the GTI concept about 13 years before VW gave name to the famous Golf GTI. With the fine “Nord” aluminum engine with double overhead camshafts, 2 dual Weber carburetors, all-around disc brakes and a smooth 5-speed gearbox, the Giulia was in fact a sports car disguised as a 4-door sedan. A real Q-car in other words. In the 60s the model was well received by the new Italian middle class, where it easily managed to transport the full family from Milan or Turin to the Lido, with cruising speeds north of the 150 kph mark. The model quickly became the preferred means of transport for the entire group of “beard and blue glasses” such as the Carabinieri, Polizia and Guardia di Finanza, only adding to the story – we all remember seeing an Italian film or two in which the Giulia had an important role.

Our example has been Danish from new and still has the original black license plates – quite extraordinarily rare since the cost of a Giulia in those days were double up compared to fx a Volvo Amazon, or 4 times up the cost of a Bug. It is the 1600 version (the vast majority of Giulia’s were delivered as 1300) and with the easy recognizable body details inspired by Professor Kamm, improving the car’s aerodynamics. Who would have thought that the fairly square Giulia design has a Cw of only 0.34? In comparison it is actually better than a Porsche 911. The fact that it was originally delivered in the Über-classic color Alfa Rosso actually makes the car even more attractive.

We know the full history of the car, and it was totally restored a few years ago – of course with full documentation. The work took over a year and included a complete renovation of the body with sandblasting, rebuild of engine, gearbox, chassis and interior, now done in thick luxurious leather. In that detail the car differs from the original of course, since this always was made of vinyl or fabric, but it’s a nice upgrade.

The car has appeared in several magazines including Motor Classic and the Alfa Romeo club magazine, and must be said to be an important part of the Danish Alfa Romeo history. A classic car that can be both enjoyed and used, and with an increasing interest internationally for the model also the value is expected to rise.