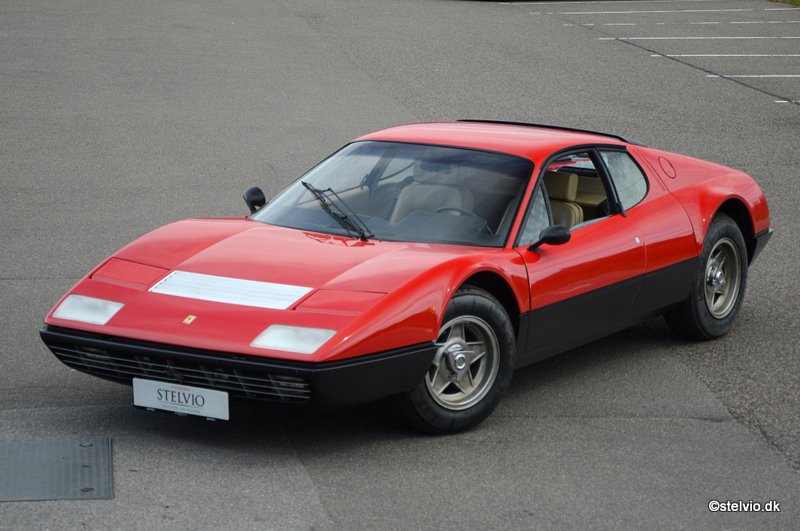 When Ferruccio Lamborghini in 1966 shocked the world with his sensational Miura, the otherwise absolute monarch in Maranello suddenly found himself on the defensive. The mighty Daytona that reigned the world for supercars began to look like an outdated dinosaur with its front mounted engine. It should however take the engineers at Ferrari another 5 years to convince “Il Commendatore” that a mid-engined design was the future and in 1971 the empire finally stroke back with the 365 GT4 Berlinetta Boxer.

The engine was still in reality a V12, but now with the cylinder banks lowered to form a flat 180 degree engine. So in reality it wasn’t a boxer despite its name. The design was taken from Ferraris successful Formula 1 car the Tipo 312. 4.4 liter, 4 overhead camshafts and 4 huge triple Weber carburetors. The body with the wedge shaped front and hidden front lights was designed by Pininfarina and built by Scaglietti in Modena. By placing the gearbox and drive shafts below the engine, the car could be kept very compact.

Emission restrictions were already starting to emerge and to keep the lead Ferrari had to make a version with bigger engine, the 512 BB. The 365 BB remained however the most powerful and fastest of the two and stands today as the purest and cleanest design. With only 387 cars built the 365 is also by far the rarer of the two.

This pristine 1974 BB has typical Italian specifications and was delivered new in Venice. It presents itself highly original with original colors and untouched interior. A known weakness on these cars is the crown and pinion in the differential. The crown wheel is made up of two parts welded together. The powerful engine will sooner or later pull it apart and it will need to be fixed on all these cars. A new part CNC-machined from one billet is available from a British company specializing in transmissions for helicopters. It comes at a price of £18,000 and then has to be fitted. This car just had this modification made and while engine and transmission was out of the car anyway it also received a new clutch and a major service.

A nice history and file is available for the serious buyer who will appreciate this opportunity to invest in one of the rarer top of the line classic Ferraris that also represents a technological milestone in the Ferrari history. Current Danish registration and papers.