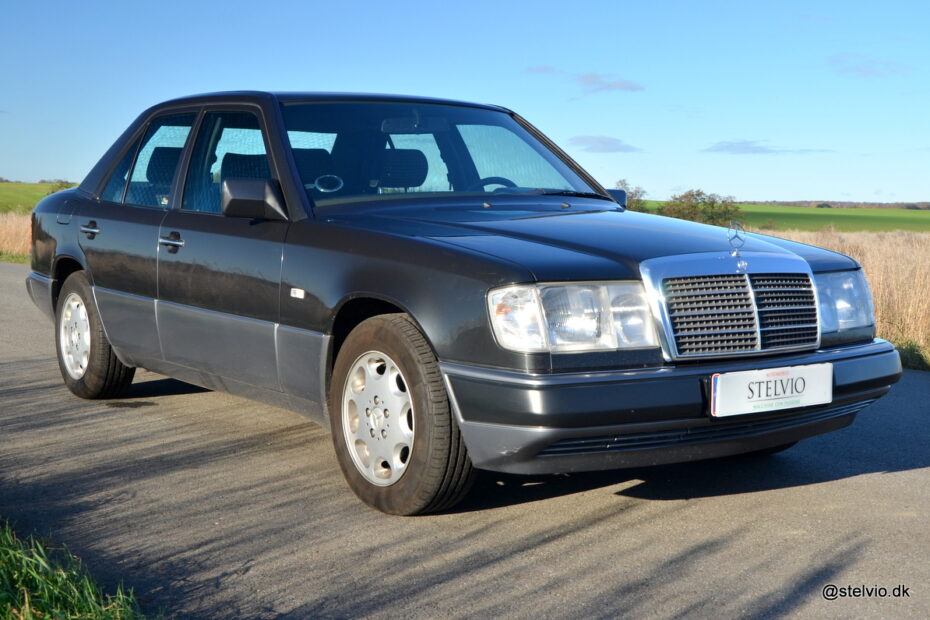 The W 124 range is Mercedes quality at its best. Produced from 1984 all the way to 1997 in a lot of variants and engines including the 8 cylinders named 400E and 500E for the first series. Engines from the S(L) range were adapted so that Mercedes could offer a discreet Autobahn locomotive, especially for 400E where the bodywork is unchanged compared to the more common variants of W124. Most people know about the 500E, which was developed and produced in cooperation with Porsche in Zuffenhausen. The work included bigger brakes and revised suspension set-up and of course the now famous flared front and rear wheel arches. Less known is that 400E has a similar suspension set-up and that the engine is in fact similar (M119) but with a displacement of 4.2 instead of 5.0 litres. All in all the 400E can be regarded as a very elegant and discreet version of the power sedan.

Our example was imported from Germany in 2014 and presents absolutely original in paint, bodywork and interior. It tells everything about the built quality that after 30 years and 174,000 km all we can find are some stone chips and a minor scratch on the left bumper! Everything in the car works as it has always done – impeccable – and you are not in doubt of the superior quality in production as well as details. The beautiful Sportline interior is very comfortable and is evenly suited for relaxed cruising or a sporty drive. On the road the car impresses with its effortless power delivery  – you have 279 PS  and huge torque –  as well as a low noise level, great ergonomics in the cabin and not least the feeling of driving around in an absolutely discreet manner. This is also helped by the fact the former owner (a well known  Danish entertainer) placed a “200D” badge on the tailgate!

Plenty of spare parts are available at reasonable prices making it affordable to maintain the fine condition of the car. This car is aimed at an enthusiast who will value the discreet power and unique build quality. We deliver the car with Danish title ready to be enjoyed by its new owner.