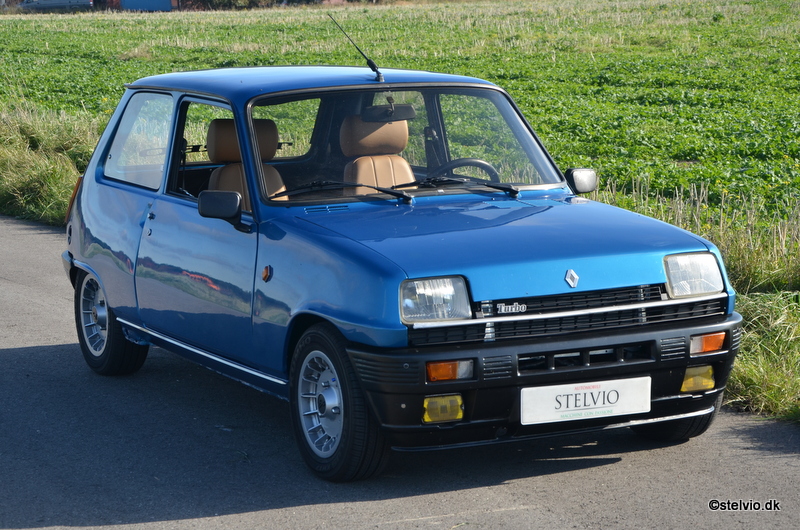 Even a couple of month before Volkswagen released the GTI concept in the new Golf model, the French had already engineered the same in the Renault 5 Alpine car. With conventional tuning they managed to get 93 bhp out of the engine, enough for fun driving in the small 5. When VW later reveiled their GTI with 110bhp, something had to be done. The solution was to install a hefty Garret T3 turbo charger, resulting in 110 bhp, enough to match the Golf. But the Alpine was lighter and more swift to drive. At the Alpine factory in Dieppe production started, but lasted only for 2 years before the 5-serie was released in the new 5 Super version. The Renault motorsport department of course continued the development of the car resulting in the since famous Renault 5 Turbo and Turbo 2 cars with central installed engines. Which in fact makes the Alpine Turbo rather rare

This is an opportunity to acquire a rare tiny French speed bomb for a reasonable amount. The car is in the perfect color – Blue Alpine Metal as well as with the characteristic wheels which does wonder to the little car.

On our car, a lot of technical work has been carried out including a more sporty camshaft delivering around 125 bhp (standard 110) and the body also received recent paintwork and new front hood, as well as renovation of the nice wheels. In the cabin the front seats are upholstered with nice leather and the steering wheel was also done.

To drive the car gives you the unspoiled experince of a first generation turbo charged car – it delivers the power like ketchup out of a bottle. Below 4000 rpm’s the car drives like any other small car from the Eighties but keep pressing on and a lot of action happens in no time. The meaning of “turbo lag” really comes into its own right – as the turbo pressure builds up the Alpine speeds like the little pocket rocket it actually is. And with surprisingly well performing brakes and steering, the car is a joy to drive on small b-roads.