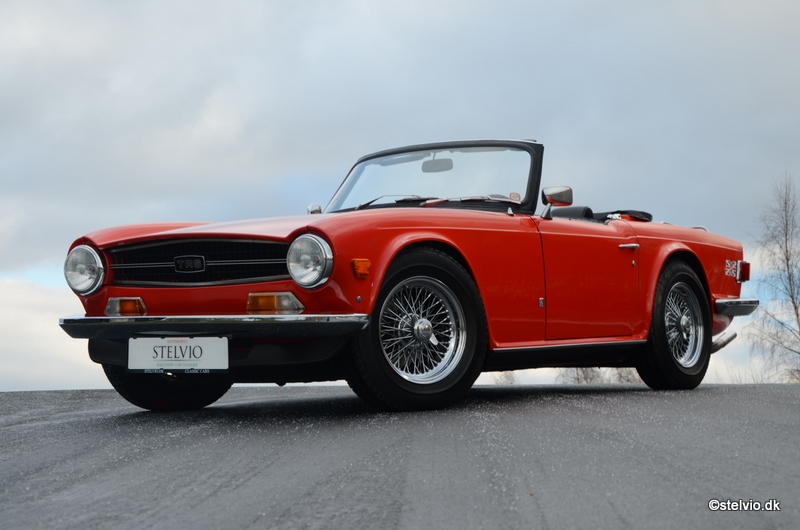 A Triumph TR is the epitome of a British sports car. TR 5 and TR 6 made up the third generation of Triumph’s classic TR series, and with a six-cylinder in-line engine they also have the power to rectify their macho looks and raw driving characteristics.

This car originates from California, and the Heritage Certificate show that the car was sold new in Los Angeles. After arriving to Denmark, the car underwent a thorough ‘frame-off’ restoration including a minor engine renovation. At the same time, the correct Lucas PI petrol injection was fitted to replace the 2 carburetors that is common for the US models. Having only been driven during summer time, the car still looks extremely well. In 2011, the engine needed a major overhaul. No expenses spared. Engine block is inline drilled, cylinders bored up to first oversize. New pistons and connecting rods fitted. Crankshaft is grounded and balanced. All bearings are replaced and a new oil pump is fitted. The cylinder head is also renovated, valve guides and steel valve seats installed for lead free fuel use. New Euro-spec camshaft installed to match the injection, etc. Next step is the fuel injection system. The most expensive component – the distributor pump – is replaced with a brand new and the entire system is disassembled, cleaned, and re-assembled with new gaskets and finally fine-tuned. The engine is now with truly Euro PI specs and with full 150 bhp. Extensive documentation comes with the car, including invoices exceeding 10.000 euro for the engine rebuild itself.

The car has since been driven just 2000 kilometers. Body and interior is still in an exceptionally great condition. Double stainless steel exhaust has been fitted. New strong 72-spoke ‘competition’ wire wheels and classic Michelin XVS in 185X15, not the cheapest option. The cabin is nice and both the hood and tonneau are made from mohair. You can find a TR 6 cheaper, but here you really get a fantastic car, no works to be done and where the roaring 150 bhp give you the full TR6 experience.