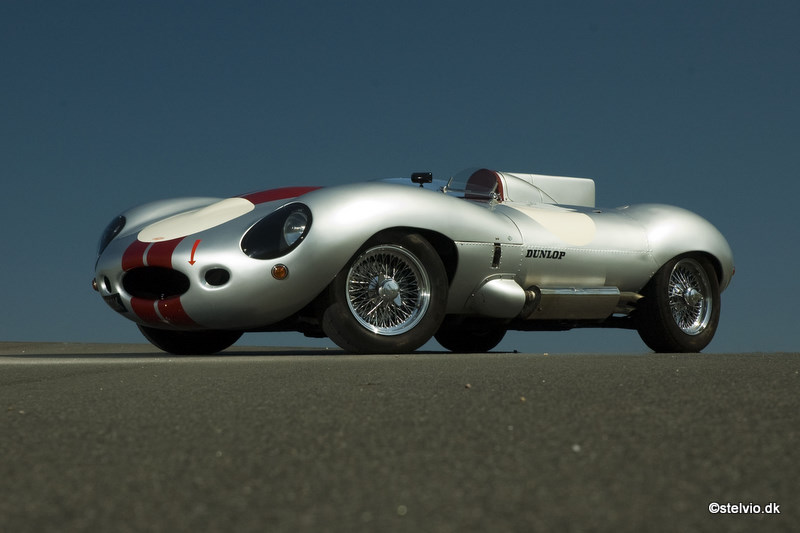 A stunning replica of the original 190mph masterpiece that was designed, built and prepared totally within Jaguar Cars Ltd in Coventry. The D-Type was to achieve a hat-trick of spectacular Le Mans victories as well as numerous victories in other great endurance races in the 1950s. The prohibitive price tag of the rare D-Type where originals now easily tops £1million results on international auctions means that very few people ever get to drive one and even fewer get to drive one as it was intended – on a race track. This has ensured a healthy demand for high quality replicas of these exotic thoroughbred racers. But whereas the originals where limited to using the 3.4-litre version of the XK engine, the biggest available at that time, replica manufacturers are now afforded the luxury of choosing the 3.8 or even the 4.2-litre version of the legendary twin overhead camshaft XK-engine. Even mildly tuned these bigger engines are easily capable of exceeding the original’s 250 BHP output.

As one of 12 cars built for one-make race series by Revival Motorsport Ltd at Mallory Park, the example offered here is powered by the large 4.2-litre XK six-cylinder engine, race prepared by the renowned Jaguar specialist Rob Beere. With its triple Weber carbs, ported and flowed head with race camshaft and numerous other modifications it is producing well in excess of 300 BHP. Power from the high-torque XK engine is massive and it guns the lightweight racecar to even higher speeds than its iconic ancestor reached on the Mulsanne straight at Le Mans. The tubular space frame chassis with independent wishbones suspension all round gives the ‘Revival’ D-type a definitive advantage in handling compared to the originals more unsophisticated beam rear axle. Body work is GRP and interior is high quality red leather. Fully fitted fire extinguisher system and 72 spoke wire wheels. Dunlop alloys as per original D-Type can easily be fitted at moderate extra costs.

JDA 920K was MOT’ed and road licensed in the UK and has a 1971 V5 title. It was raced by Alex Bell on Silverstone, Brands Hatch, Donington, Snetterton, Mallory Park and other tracks. Always as a front runner in its class, it has achieved an impressive list of results and would make an ideal fast road, track or race car. Prior to 2004 it was used by the Italian edition of Vogue magazine for a photo-shoot featuring a bevy of supermodels. Restored in 2006 and now ready to enjoy, this beautiful D-Type is in superb condition and an absolutely breathtaking experience to drive.