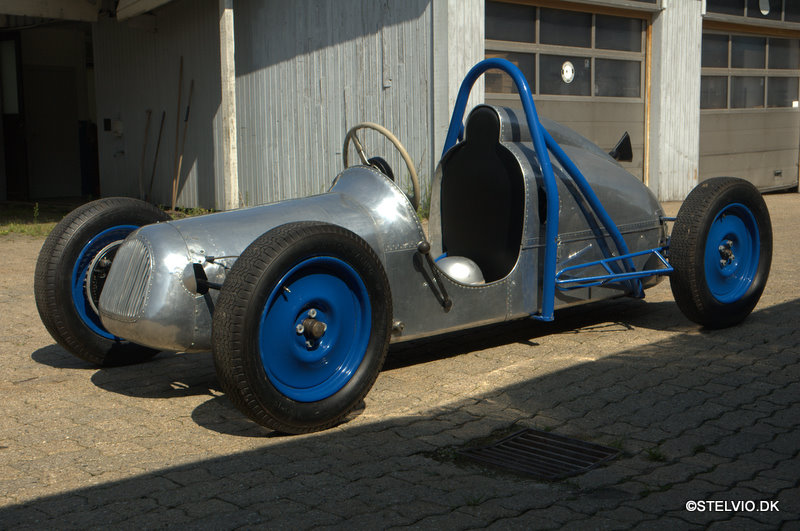 During an 8 month trip to America in 1947, air craft engineer Eric Lundgren was fascinated by the Midget racing scene he saw at the Gilmore Stadium in Culver City and on other west coast tracks. In the mid thirties Lundgren had raced his Excelsior intensively on the Swedish tracks.

Back in Sweden in 1948, in a small garage at Bromma airfield, he started designing and building his own Midget racer, applying the best advices he learned from the American Midget masters and incorporating the techniques from his aviation back ground.

The body work overshadowed everything else seen in these days. Lundgren was assisted by aviation colleague Idoff Jönsson, a wizard in forming leaf thin aluminum panels into any shape.  All panels are 1 mm Dural.  With exception of the detachable nose for easy access to the steering components, not a single bolt is present in the body. Every panel is riveted. Every rivet hole is press counter sunk and not drill counter sunk thus preserving full plate gauge and integrity. By using 40 mm air craft grade tubing and few and easy means, Lundgren succeeded in making the chassis very stiff and rigid. Aero technique between four wheels.

A new 500 cc JAP engine of the latest and most modern type was ordered from Midget racing London guru Martins. The 45 bhp ethanol fuelled engine was coupled to a 4-speed Albion gearbox, a totally new brand at that time, and especially designed for Midget racing with close ratio gears. Engine and gearbox was according to Martins instructions bolted directly to the chassis without rubber mountings.

A lot of nice details as riveted fuel tank, suspension and steering reveals the high quality of this very rare build.

Lundgrens intension was to build a whole series of his Midget design. However in 1949 Eric Lundgren was killed in a traffic accident and therefore this build remains his sole legacy.

The 500 cc Midget ‘movement’ began in 1946 and developed into the 500 F3 class in 1950. Many later well known drivers such as Stirling Moss, Ken Tyrrell, Peter Collins and a young chap named Ecclestone was involved in 500 cc racing. This important part of of early post-war motor racing when money and materials were scarce, can be studied here at the 500 Owners Assocations website

This small but delicious piece of Swedish racing history is eligible for many historic events. It is in full functioning order and comes with some spareparts and Lundgreens 1948 helmet.